Hey everybody what’s going on?

It’s arbitrary night in NY as i write this. It has been a great but tiring week for my training…

Ii started the week on Monday running 5 miles. Immediately following I did a heavy lifting session of midpulls, weighted dips and squats.

On Tuesday I ran 3 and followed the same protocol, but did a set of splits.

By Wednesday I was beattttt- I’ve been going to bed early but my girlfriends cat insists on waking me up at 4 AM and refusing to let me fall asleep again…every day.

I tried to do an insanity session on Wednesday but it just wasn’t happening.

Today I ran 6 miles in about 50 minutes. I also made my Ironman training schedule which, if I I did following Iron Fit’s regiment by textbook, starts a week before the Goofy Marathon in Disney. :-0 have to figure out what to alter…

This morning.  Finished in 2 hours.  Used a banana and coconut water to stay fueled.  I really credit Insanity with my improvement in speed.  It’s a great program for increasing athleticism.

Dogfish Head is one of the premiere brewers in the North East and they really have something good here with Tweason’ale.

The name has something to do with it being brewed between two seasons or something like that. It combines shorguram, honey, strawberries and hops to produce something that definitely tastes alcoholic, if not completely like beer.

Make no mistake, there’s room for fruit-tasting beers out in the market- one need look no further than Banana Bread made by- damn I can’t remember who- it is delicious but neither paleo nor gluten-free. But the sweetness in this brewed batch kind of gives it a soda/cider-ish effect; it is balanced however, by the hops added.

Dogfish Head is known for its hoppiness; it brings it to Tweason’ale, but it’s not as beer like as Celia, as I have written of earlier, made by The Alchemist; nor is it as beer life as Red Bridge, a gluten free option from Anheuser Busch; which negates its paleo-purpose by adding corn syrup to the recipe.

Anyway, this is a delicious option, but it is not really a beer substitute. The nutrition label says 13g of carbs and 0g of sugar- that can’t be right, I mean- honey…strawberries…I’m going to write them and see what they say about that.

It feels weird.  Like I should be doing something.

The reason I’m not is to be rested for my 14 mile’r tomorrow.  Don’t want to do anything that will sabotage it.

But I feel like I have a very specific goal when it comes to working out and by passing on it today, it’s like, wtf.  Ya know?
But it’s like it says in the Tao ‘the sage knows when to stop pouring,” blahblahblah.
Next week I’d like to get in 2 weight lifting sessions, 1 spin class, and 2 Insanity workouts- plus I need to run Monday, Tuesday, Thursday and Friday.  Writing this out really makes it look stupid.

Oh and I signed up for The 2013 Goofy Challenge in Walt Disney World during Marathon Weekend.  I really can’t wait for that. It was an awesome experience in 2012.
Have a great weekend everyone!

5 mile run this morning.  Less than 2 months until the NYC Marathon – 26.2 miles through all of the city’s boroughs.
Ran it in 43 minutes.

I really got into a good place mentally this morning.  Around mile 4 I was  like, “eff man this sucks.  My legs feel a thousand pounds, I’m sore from my double workout yesterday,” bitchbitchbitch blahblahblah…
At some point during my running tenure I realized, “whether you’re running 26 miles or 5 it’s always the last mile that sucks the most,” so today I said, “what would I tell myself if I was running 7 miles today? ” and I replied at mile 4.2 “it’s only getting worse.”

It sounds stupid but it really brought me to a better place.
The street I ran home on for my last .5 is narrow enough for one car, primarily used by bikes and runners, surrounded by bungalows rockin’ the Pier 1 beach decor. For what I guess was every .15 miles I’d pick a target and focus and think about nothing but that.  And I sprinted the whole way back.  It was great- I didn’t allow myself to think about the sweat, my shorts that won’t stay up, the burgeoning inflammation my legs, I just sprinted and finished it in 3 minutes.

Am I off tomorrow?

Either way, a loss is a loss or a gain or whatever pun you want it to be. 🙂

4 pounds and 2 weeks to go.
Going to limit salt this week.

Day 8 was a repeat of Cardio Power.

It’s a really intense workout, as I have written previously.

By the time we got to the floor exercises, say 26 minutes in, I think the floor wiped itself with me.  Bringing your legs in and out, side to side, jumping up, back down in a plank position, oh and a couple of push-ups and floor sprints proved to be difficult.
I did a heavy weight lifting session this morning and I couldn’t help but relish in the irony over the congratulations I gave myself this morning over a new personal best with decline bench presses.
Still, Insanity is all about giving 100% of what you got- it may not look pretty or as no-nonsense as the people in the video make it, but that’s why they’re there, and I’m at home with my hands on the floor in a plank wondering when the last time I vacuumed was as I dust sand off my hands.

I really hope anyone interested in Insanity just picks it up- it is grueling, but it doesn’t pretend not to be- it’s not called, “eh, it’s kinda crazy,” it’s called Insanity 🙂 but you get your moneys worth with every session. 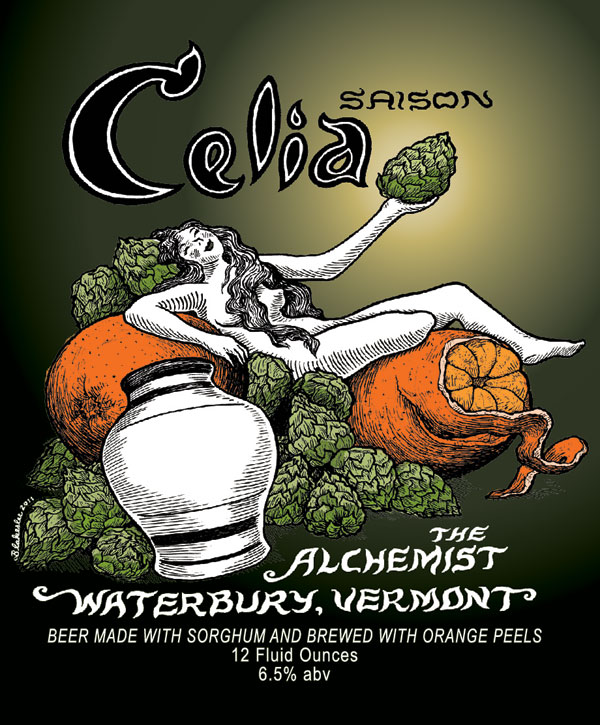 Celia Saison – made from the good people at The Alchemist in Waterbury Vermont- not far from Burlington.

Burlington and the surrounding area is a hot bed for great brewers, most notably probably is Magic Hat.

Anyway, this beer was brewed for, I believe, the owner’s wife after being diagnosed with celiac disease- a gluten allergy, essentially.

It’s kind of a rare find- though I got it at Trader Joe’s. I love it. Gluten free beer typically misses the mark on that “beer taste.” This inches closer to it and throws a great curve ball in with the orange accents. So it’s not really a traditional beer taste, and doesn’t pretend to be, but it is reminiscent of it and delicious.

Not very high in calories either.

Well according to the hotel gym scale I was 172- I put a 10 pound weight on there to see if it was accurate and it was .
Woo!
Now the reason I write “weigh in?” is because it wasn’t on the gym scale for a constant measurement, so I’ll have to “weight” and see- wow I’m witty.

The gym at this hotel is awesome. Having a treadmill is all I wanted it to have because it’s kind of in a rough-neighborhood, haha, and I need to get my mileage in as I train for New York. However they had all sorts of machines and dumbbells.